What is food borne disease

Food borneÂ is an illness cause by contaminated food, pathogenic bacteria, viruses, or parasites that contaminate food, as well as chemical or natural toxins such as poisonous mushrooms and various species of beans that have not been boiled for at least 10 minutes.

The incubation period tends to cause sufferers to not associate the symptoms with the item consumed, and so to cause sufferers to attribute the symptoms to gastroenteritis for example. Symptoms often include vomiting, fever, and aches, and may include diarrhea. Bouts of vomiting can be repeated with an extended delay in between, because even if infected food was eliminated from the stomach in the first bout, microbes (if applicable) can pass through the stomach into the intestine via cells lining the intestinal walls and begin to multiply. Some types of microbes stay in the intestine, some produce a toxin that is absorbed into the bloodstream, and some can directly invade deeper body tissues.

Foodborne illness more often than not arises from improper handling, preparation, or food storage. Good hygiene habit before, during, and after food preparation can minimise the chances of contracting an illness. There is a consultation in the public health community that regular hand-washing is one of the most effective defenses against the spread of foodborne illness. The action of monitoring food to ensure that it will not cause foodborne illness is known as food safety. Foodborne disease can also be caused by a huge variety of toxins that have an effect on the environment. Foodborne illness can also be caused by pesticides or medicines in food and naturally toxic substances such as poisonous mushrooms or reef fish.

Bacteria are a frequent cause of foodborne illness. In the United Kingdom during 2000, the individual bacteria involved were the following: Campylobacter jejuni 77.3%, Salmonella 20.9%, Escherichia coli O157:H7 1.4%, and all others less than 0.56%. Toxins from bacterial infections are delayed because the bacteria need time to multiply. In the past, bacterial infections were thought to be more prevalent because few places had the capability to test for norovirus and no active surveillance was being done for this particular agent.

As a result symptoms associated with intoxication are usually not seen until 12â€“72 hours or more after eating contaminated food. Usually the symptoms are seen the day after the food has been ingested and digested completely. However if the intoxication involves preformed toxins as is the case with Staphylococcal food poisoning, the symptoms appear within a few hours.

In postwar Aberdeen (1964) a large-scale (400 cases) outbreak of typhoid occurred, caused by contaminated corned beef which had been imported from Argentina. The corned beef was placed in cans and because the cooling plant had failed, cold river water from the Plate estuary was used to cool the cans. One of the cans had a defect and the meat inside was contaminated. This meat was then sliced using a meat slicer in a shop in Aberdeen, and a lack of cleaning the machinery led to spreading the contamination to other meats cut in the slicer. These meats were then eaten by the people of Aberdeen who then became ill.

Outbreaks of foodborne illness since the 1970s prompted key changes in UK food safety law. These included the death of 19 patients in the Stanley Royd Hospital outbreakÂ  and the bovine spongiform encephalopathy (BSE, mad cow disease) outbreak identified in the 1980s. The death of 17 people in the 1996 Wishaw outbreak of E. coli O157Â  was a precursor to the establishment of the Food Standards Agency which, according to Tony Blair in the 1998 white paper A Force for Change Cm 3830, “would be powerful, open and dedicated to the interests of consumers”. 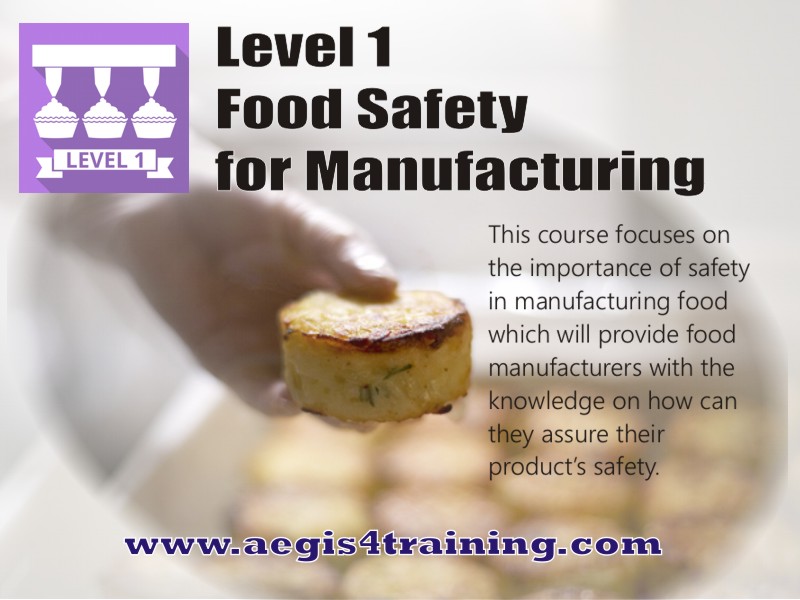 You know when choosing Aegis 4 Training you are getting the best quality and most comprehensive training relevant to you.

The aegis 4 training remaining to food safety rules, no doubt, saves lives. Employers and employees of any food services must retain in mind that cleanliness is key, from composition, production, and manufacturing to delivering and catering. Not only the cleanliness of the food itself needs toÂ be ensured but also that of the environment in which the food is processed, prepared and delivered. Also, the people in charge in the tasks must be competent and well informed.

There are a wide range of different food safety courses, hygiene and sustenance training to choose from. Food safety qualifications at level 1, 2 and 3 are all sector specific to ensure all learning is relevant.

These qualifications have been developed to raise awareness of key food safety issues and to provide employees with an induction to food hygiene, prior to undertaking the Level 2 Award in Food Safety.

The Level 1 awards are also suitable for employees for whom English is a second language or those with special needs.

Why is this training important?

Food business operators must ensure that employees are supervised, instructed and trained in food hygiene matters in order to guarantee safe food to consumers.

And it also discusses matters such as:

Generally there are questions that should be answerable after the end of the course. First and foremost the course should be able to introduce what food safety for manufacturing is all about and its importance. Next the laws that applies for food manufacturing businesses, giving knowledge to the employers and even employees alike what are their obligations to ensure food safety for food manufacturing. Afterwards, understanding the food hazards, what are they, there sources and their common effects.

Topics such as how employees should handle the food, how clean the workplace environment should be and how to properly do cleaning, disinfection, sanitization and

Sterilization in order to understand on how cleaning serves as a factor in preventing food contamination. The equipment and workplace environment should also be promoting cleanliness and high standard.

The discussion about temperature control as method to minimize bacterial multiplication is also due, as well as importance of proper heat processing of foods and making sure food isn’t under-cooked after. Â And another important thing is that the course should teach appropriate storage conditions for different types of food.

After the food safety for manufacturing courses, the people who took the course should learn:

TheseÂ multitudes of informationÂ are important toÂ learn andÂ ensure food safety standards being followed properly by the food manufacturing businesses that plan to take up this course.

Food and Drink Manufacturing Industry in the UK

Food manufacturing is a big deal for the food industry, given that the regular and large amount of consumption of food from food manufacturing is being consumed by people. It is no question that to most countries and UK being no exception has a lot of Food and Drink manufacturing industry that affects everybodyâ€™s daily lives.

Food and drink is the largest manufacturing sector in the UK with a turnover of Â£76 billion. There are over 8,000 companies in this industry and they employ about 400,000 people. The industry invests in research and development (R&D) which results in about 10,000 new products being introduced to the market every year.

Aside from how big the food and drink manufacturing industry is in UK. UK is also known for producing one of the most safe and hygienic food available. The UK is also innovators of the Food Manufacturing industry as they first introduced frozen food, ready meals and instant coffee. And of course new emerging technologies and products to cater and improve human lives better are also at work.

In ensuring the quality as well as to continue the safety of the produced food by manufacturers, there is an organization based on UK called Food and Drink Federation (FDF) for this reason.

The Food and Drink Federation (FDF) is the voice of the UK food and drink industry, the largest manufacturing sector in the country.

They account for 15.7% of the total manufacturing sector by turnover and employ around 400,000 people in the UK across 6,360 businesses. We are an incredibly diverse sector, speaking on behalf of global brands and thriving small businesses. TheyÂ communicate our industry’s values and concerns to Government, regulators, consumers and the media. They also work in partnership with key players in the food chain to ensure our food is safe and that consumers can have trust in it.

Given how humongous the food manufacturing industries are in UK. The established standards for food safety and hygiene should be followed religiously by upcoming businesses and established alike. Following these food safety standards is not only a legal obligations for employers to follow, these food safety standards also prevent the disasters that may arise from improper handling or care of food especially as large scale as food manufacturers.The damages from the food-related incident could be catastrophic both for the business perspective and more importantly public health perspective.

For food manufacturing industry is not only responsible for making sure they make tasty and edible food but also safe and clean as well.