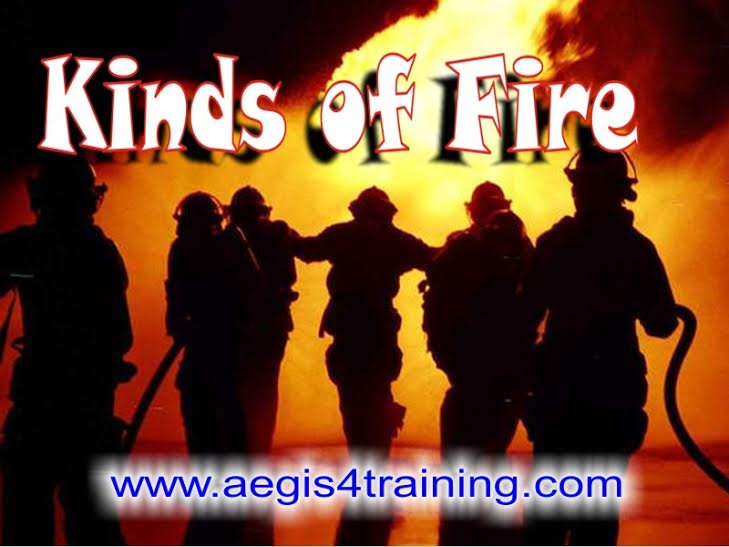 Kinds of Fires are classified by the types of fuel they burn.

Class A Fires compose of common combustibles such as wood, paper, trash or something else

that leaves an ash. Water works best to extinguish a Class A fire.

Class B Fires are fueled by combustible liquids, which include oil, gasoline, and other similar

This sort of fire may be caused by short-circuiting machinery or overloaded electrical cables.

These fires can be a severe hazard to firefighters using water or other conductive agents, as

electricity may be conducted from the fire, through water, to the firefighters body, and then

Electrical fire may be fought in the same way as an ordinary combustible fire, but water, foam,

and other conductive agents are not to be used. While the fire is or possibly could be electrically

energized, it can be fought with any extinguishing agent rated for electrical fire. Carbon dioxide

baking soda are especially suited to extinguishing this sort of fire. PKP should be a last resort

solution to extinguishing the fire due to its corrosive tendencies. Once electricity is shut off to

the equipment involved, it will generally become an ordinary combustible fire.

In Europe, &quot;electrical fires&quot; are no longer recognized as a separate class of fire as electricity itself

off, the fire can be fought by one of the other class of fire extinguishers

Class D Fires are combustible metal fires. Magnesium and Titanium are the most familiar types

of metal fires. Once a metal ignites do not use water in an attempt to extinguish it. Only use a

Fires that involve cooking oils or fats are designated Class K&quot; under the American system, and

of the flammable liquid/gas class, the special characteristics of these types of fires, namely the

higher flash point, are considered important enough to recognize separately. Watermist can be

used to extinguish such fires. Appropriate fire extinguishers may also have hoods over them that

help extinguish the fire. Sometimes fire blankets are used to stop a fire in a kitchen or on a stove.

An simple way to keep in mind these types of Fires is (beat) Class A leaves an Ash, (beat) Class

B boils,(beat) Class C has current (beat), and Class D has Dense Material (beat), And donâ€™t

forget the most overlooked, Class K for Kitchen.